Dusseldorf Until now, the world of quantum computing seemed to be ordered in binary form. The US on one side, China on the other. Both countries regularly report new breakthroughs in quantum computing development. In the future, their computers should be able to solve problems that high-performance computers fail to solve. In Europe, on the other hand, research is – once again – above all else.

A German-Finnish start-up is challenging this global order. IQM has raised around €128 million from venture capitalists – amid the tech crisis in the stock markets. This includes a convertible loan from the European Investment Bank (EIB) in the amount of 25 million euros.

It’s a leap into the top league: Only four companies worldwide have so far managed to raise larger rounds of funding in the field of quantum computing. IQM’s valuation is now likely to be around half a billion euros: “We have the ambition to create a leading global company that can keep up with Google and IBM,” says CEO and co-founder Jan Goetz. And as bold as the goal may sound, many in the state and industry are pinning their hopes on the four-year-old startup.

Politicians have recognized the importance of future technology. In 2018, the EU Commission announced a billion for quantum technologies in its ten-year ‘Quantum Flagship’ initiative.

Top jobs of the day

Find the best jobs now and
be informed by email.

“The German economy must prepare for quantum computing”

“The German economy must prepare itself for the age of ‘quantum computing’,” appeals Claudia Linnhoff-Popien. The professor at the Ludwig Maximilian University of Munich (LMU) advised the federal government on quantum computers during the previous legislative term.

Once the quantum advantage is achieved, according to the expert, “the technology will disrupt the market.” Entirely new approaches would then be possible, particularly in the areas of materials research, traffic planning and drug development.

By quantum advantage, the researcher means: just a quantum computer is superior to classical computers. No one knows if this is technically possible. Europe can see this as an opportunity. There is time to catch up.

The current generation of quantum computers is comparable to the computing systems of the 1950s, says Linnhoff-Popien. “The calculations that can be done with them are still very simple – but the principle has been shown to work.”

>> Read here: From the perfect coffee to the quantum computer – this is how Trumpf wants to improve his chips

Two approaches are considered particularly promising from a scientific point of view. The first is quantum computers based on photonic systems. This is where laser beams come into play. Bound photons—that is, particles of light—carry information and can assume an infinite range of states.

In the US, for example, PsiQuantum is pursuing this approach, in Europe Universal Quantum is working on it with German quantum field researcher Winfried Hensinger. And with Trumpf, a medium-sized family business also relies on the photonic approach: It has invested a double-digit million in the company Q.Ant, which is developing a quantum chip for photonic quantum computers.

Recently funded start-up IQM, on the other hand, is testing superconducting circuits. The American giant IBM is also pursuing this approach. Here, capacitors on a special quantum chip are made to oscillate. This turns them into so-called qubits. While oscillating, qubits can take on any state between zero and one.

However, quantum particles are very sensitive and change their controlled quantum properties at the slightest perturbation. The computational core of a quantum computer operates only in a sterile space-like environment.

Encased in a vacuum, temperatures must be close to absolute zero. So about minus 273 degrees Celsius. Smaller vibrations and even reading the results can lead to distortions. Therefore, experts do not expect perfectly functioning quantum computers until the end of the decade.

Niko Mohr is a partner at the management consultancy McKinsey and analyzes current developments in quantum computing with a team every three months. “Quantum computing technology still needs time to reach a maturity sufficient for some industrial purposes,” he says – especially when it comes to hardware.

For this, startups would also require very high investments. Last year, $700 million flowed into quantum computing startups worldwide, 65% of it to hardware developers.

The Qutac consortium with DAX companies such as Infineon, BASF, Munich Re and Volkswagen is dedicated to this. Much is still based on simulation. “But significant advances are only possible if something happens to the material,” says Mohr.

Startups like IQM with their own hardware development are therefore of great importance to Europe. Finland and Germany have already ordered quantum computers from IQM worth more than 50 million euros in total – even if these computers are only suitable for research purposes so far. IBM and Google are not allowed to bid on the project tenders. Europe must consciously develop its own capabilities.

Quantum computers could revolutionize many areas of the economy. For example, they could speed up the training of neural networks for artificial intelligence. These are today very necessary for the development of autonomous driving. The new types of computers could also help with unsolved optimization problems in logistics or increase the performance of batteries when materials are exchanged or modified. At most, simple hydrogen atoms can be simulated with today’s supercomputers. Accurate simulation of complex chemical processes is beyond the reach of computers.

Progress in Germany thanks to political activities

According to experts, the federal government’s initiative has also raised awareness among many user companies. In a survey by the IT association Bitkom, 13 percent of companies with 500 or more employees said they were planning or discussing the use of quantum computers, and another two percent are already using them in practice and testing application scenarios, often together and in exchange. . 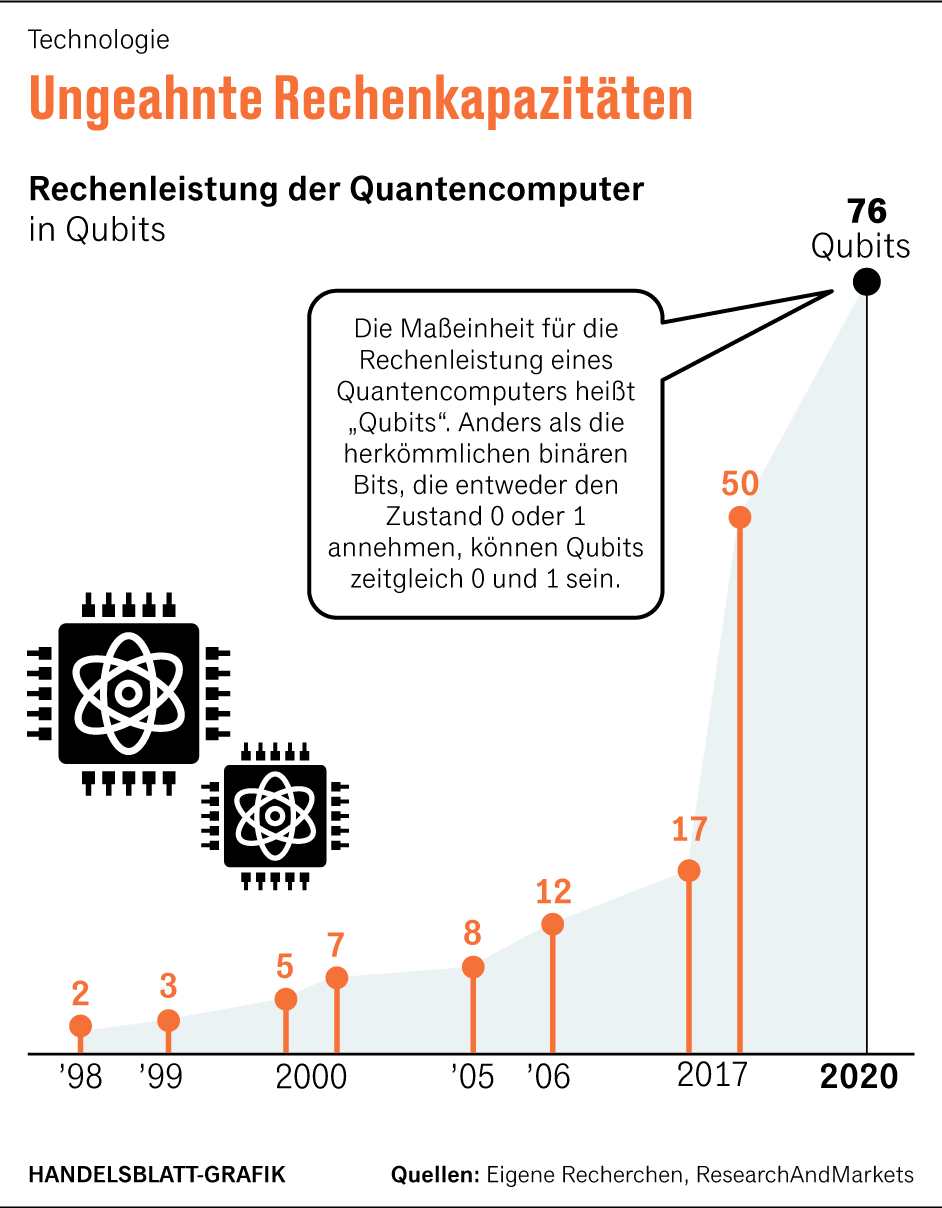 According to analysis house Market and Markets, the quantum computing market was already worth 471 million US dollars in 2021. By 2026, it should have grown to almost 1.8 billion euros.

In some cases, however, expectations are still disappointed. “We see that individual quantum computer startups in the software sector are currently strongly inclined to make very big promises. In this way, they want to become more visible to investors,” says Nico Mohr.

IQM founder Goetz is self-critical about his own industry. “We still need to work on managing expectations.” In the venture capital business, it’s common to work with big promises for the future. However, start-ups may not yet be able to meet the expectations that have now risen.

Germany’s trump card in the quantum race is research – and it is being used deliberately. Perhaps for the first time, Germany seems to be succeeding in systematically promoting spin-offs in the field of core technologies.

The “Quantum Computing User Network” (QuCUN) has been around since May. In collaboration with spin-off Aqarios, as well as BASF and SAP, Ludwig-Maximilians-University Munich is developing a platform intended to become a central point of contact for companies involved in quantum computing.

The new company, in which Professor Linnhoff-Popien has a significant stake, wants to find out for companies which of the available quantum computers from D-Wave, Rigetti, Fujitsu and IBM could best solve their problem under the guidance of CEO Daniel Ratke.