Rising interest rates, the war in Ukraine, bottlenecks in delivery and persistent fears of inflation and recession weighed on global stock markets in the first half of the year and led to severe price distortions for most individual stocks. In the SDAX small stock index, which includes 70 stocks, only six stocks have a positive return from year to date.

At TecDAX, which includes the 30 largest German companies in the technology sector, only five stocks outperformed year-to-date. In the top German DAX index, which now includes 40 shares, only five stocks ended above the line. At the bottom end, on the other hand, the losses were sometimes frightening. Mail order company HelloFresh has the weakest performance on the DAX so far this year with losses of more than 50%. 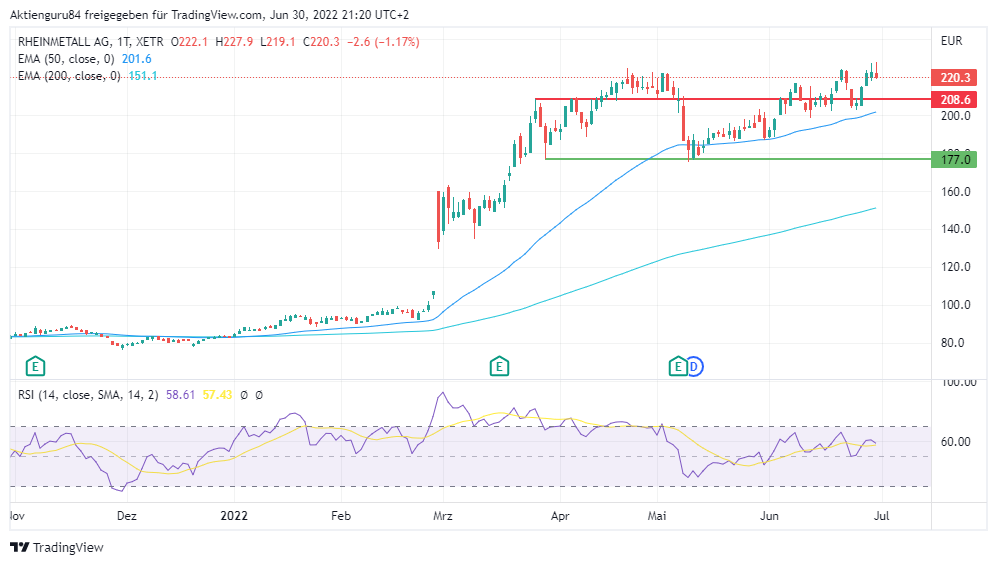 Rheinmetall’s stake leaves them all behind

In the index of medium-sized shares, MDAX, which includes 50 shares, eight shares could be placed above the line. By far the best value on the MDAX and across the German stock market is the stock of car and equipment supplier Rheinmetall, which has risen more than 165 percent since the beginning of the year.

Should investors sell immediately? Or is it worth finally joining Rheinmetall?

While many stocks reached new lows at the end of this month and therefore in the first half of the year, the Rheinmetall stock climbed significantly to a new all-time high on Thursday, although it fell slightly towards the end of trading.

The company and the share benefit from the fact that the federal government wants to invest 100 billion euros in the Bundeswehr as part of a special fund in the context of the Ukraine war. In the meantime, the special fund has also been approved by all parties.

As Germany’s largest armaments company, Rheinmetall can assume that the status of orders will flourish accordingly. In addition, the federal government is committed to investing at least two percent of gross domestic product in security and defense in the future.

In recent weeks, the company has already received many orders, not only in the defense sector, but also in the second largest business sector, the automotive industry. An ammunition contract worth € 850 million was negotiated with Hungary. Rheinmetall received another large order in the defense sector from Slovenia. It should have a volume of 250 million euros.

Get a free PDF report for Rheinmetall: Download it here for free

This was followed by further orders of hundreds of millions in the automotive and defense sectors. An order for a 250m-euro exhaust gas recycling system was announced in June. This week went smoothly. Rheinmetall received a new order worth 42 million euros from its Chinese partner in a KPSNC consortium. These are chassis parts for an electric SUV for a new player in the electric propulsion market.

In addition, the subsidiary Rheinmetall MAN Military Vehicles (RMMV) has entered into a cooperation agreement with France-specific Michelin tires in the field of mobility related to defense.

The board is confident of achieving its annual goals

With the data from last quarter, Rheinmetall’s Executive Board was confident that it would achieve its goals for the year. These predict a sales increase of 15 to 20 percent and an operational return of more than 11 percent. Last year, sales rose 4.7% to 5.658 billion euros. The operating result improved by almost a third to 594 million euros and reached a new record level. The operating margin was 10.5 percent after 8.3 percent in 2020.

Rheinmetall boss Armin Papperger estimates that sales in Germany alone will increase by € 2 billion in the future and will therefore double the current level. In addition, other Western countries are also increasing their defense spending in the face of Russian aggression and the new threat situation.

Paperger speaks of a “new era of defense policy.” He further added that the western world was “in the midst of rapid market growth”. Beyond the German border, one sees “international possibilities and in some cases very specific projects that also support the dynamics of our development”. The new European security and defense policy could therefore bring the company high sales for years to come.

Rheinmetall not only can do security and defense (defense), but has also made a name for itself as a car supplier. In the automotive sector, alternative electric motors are used, with particular emphasis on hydrogen technology, in order to contribute to technological change in mobility.

“With a further increasing share of sales in the field of alternative movements, we are on a very promising course to promote the transformation of the industry and the exploitation of new growth opportunities for us. Responsibility is also our issue here – for change in climate-friendly mobility and new forms of energy supply, e.g. with the help of hydrogen technology, “says Armin Papperger.

This results in two areas of dynamic growth for the stock, which suggest that the price potential has not been exhausted despite the brilliant rally this year.

How will Rheinmetall develop now? Is it worth a entry or should investors rather sell? Find out the answers to these questions and why you should now act on your current Rheinmetall analysis.